A holiday with an unexpected twist!

Peter Lewis tells how his holiday at Scargill had quite an unexpected twist!

I  first came to Scargill on a Parish Weekend from Nottingham when I was new to the city and my parish church.  (It was an excellent way to get to know others in the Parish over the weekend and I made friends amongst the community from that first weekend!)  Having returned a number of times on my own or with friends for holidays or workshops, I came in 1991 for a holiday week and became aware during the walks that there were a number of children there with just one parent and keen to be more active, so we organised some extra football games and took a whole group of children off to the swimming pool twice during the week.  Amongst the children were two boys from Nottingham who were on holiday with their father immediately after their parents’ divorce.  The younger boy attached himself to me, telling me jokes all the time and wanting to  walk on the rambles with me.  At the end of the week the two boys told me they were singing in a concert in Nottingham shortly with a youth choir and suggested I should come.  I didn’t think too much more about it and had no way of contacting them, but about a week later some close friends at church asked me if I’d like to come to a youth choir concert which their own son was singing in and I joined them for this.  As soon as I entered the concert hall the two boys I’d met at Scargill recognised me and waved.  In the interval they came and got me to take me off to meet their mum.  She said she’d heard an awful lot about me and perhaps I’d like to bring my Scargill photos round for tea some time.  This was the first stage in a quite unexpected new relationship and we were married in 1994.  We are next month celebrating our Silver Wedding and have two grandchildren – the offspring of the younger boy who wanted to tell me jokes.  Our elder son now lives in Australia and whilst we have visited him there we also maintain contact digitally on a regular basis.  Both my step-sons continue to be amused by the way that this encounter at Scargill changed all our lives!  My wife and I have been back to Scargill many times, as she had also been there in the 1980’s, and we actively promote Scargill in the Derbyshire village churches where we now live. I am a Reader approaching my 34th year of ministry and my wife is active in church music, leading worship and counselling. 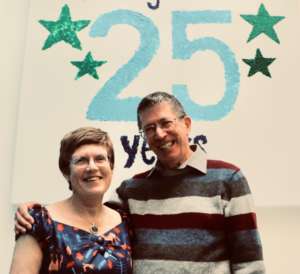 I recently told a version of this story at a celebration for the anniversary of the Youth Choir in Nottingham where it caused lots of laughter and amusement!

Peter & Rae are due to visit Scargill again later this summer.