What in the world am I doing here? Part 2.

Hey ya’ll from Audrey in England; WHAT IN THE WORLD AM I DOING HERE? Part 2. 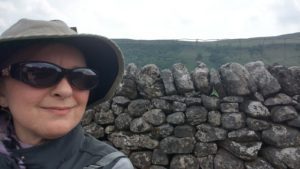 I have been here a week now and settling in nicely.  6 weeks are gonna fly by!

I want to tell you more about this place.  I wasn’t prepared for just how beautiful it is.  It’s in the middle of the Yorkshire Dales National Park, so  think “Great Smokey Mountains National Park” or “Blue Ridge Parkway” and you get the idea.  There are miles of scenic drives and natural beauty, scatterings of tiny little stone villages like this: 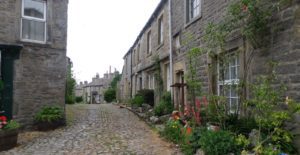 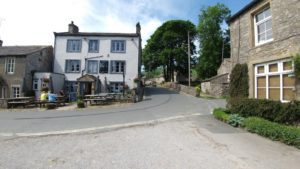 and miles and miles of stone walls like this: 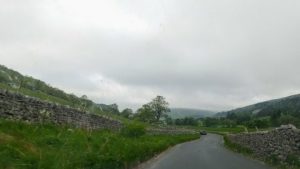 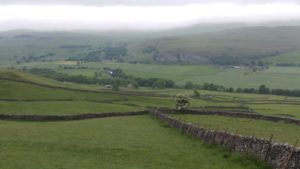 The whole region was formed by old glaciers and movement of water that exposed cliffs of rock (SCARS) and cut deep valleys along the flowing river beds (GILLS), where most of the roads and villages are.  The remainder is divided by rock walls into pasture lands.  And now you know how “Scargill” got its name that sounds so unusual to our American ears.   I will post more photos of the surrounding area later.

Scargill House/ Scargill Movement is on about 90 acres that started as an estate in the 1800’s.  It passed through several owners and was gradually updated.  In the late 50’s, it was purchased to develop into a Christian conference and retreat center (or centre, is the British spelling) so dorm wings, meeting rooms, and a chapel were added at that time.  It sprawls in all directions, so impossible to take a photo that really captures the entire setting.
Today, this is the impressive entrance: 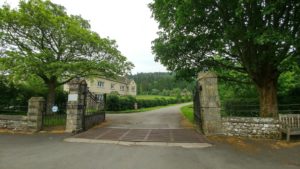 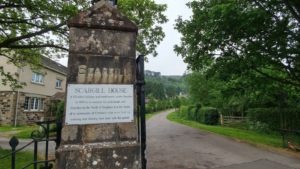 …and the approach up the driveway: 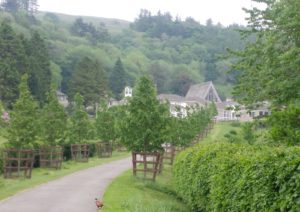 (By the way, notice the large pheasant at the bottom right.  He/she lives here.)
Today, this is the part of the estate that houses the guest rooms, dining, and meeting rooms.

My room is in the wing on the left with the clock tower.  It was originally a barn that dates back 300 years.  The original timbers are still exposed inside.  Really cool.

The whole place a wonderful mass of old buildings with countless up and down steps, a winding maze of corridors, numerous doors, squeaky floors, drafty widows, funky old plumbing and pipes and repaired leaks…  All part of maintaining a charming old place, that requires tons of maintenance and lots of daily labor to keep it all taped together.  And the community does it wonderfully here so it just flows along seamlessly to the guests.  This place holds a special place in the hearts of many people who come here from all over England.  For us, think of places like Montreat or Lake Junaluska or any old church camps you have been to and you get the picture.

Plans are being developed to rebuild and remodel much of the complex in the future to bring it up to modern standards with new technology, better insulation, and improved building materials.  But all that requires permission from the National Park, and tons of money, so it is going to be a slow process.  Meanwhile, people who come to this place really treasure it and love to come here.  Not for the buildings, or just for the natural beauty of the area, but because of the special hospitality they receive from the people here.  But more about that next time.

Until then,
Deep Peace to you,
Audrey